Thoughts on how to add a strategic layer to tracking studies

We love our tracking studies but James Rohde argues that there are ways to improve their ability to do more than just track.

One of the contributing issues is that nearly all of the information reported from tracking is based off a direct question and answer from respondents, such as “Where have you shopped in the past four weeks?”

While we use a variety of tracking studies at MARC USA, we are rarely asked for a base rate of visitation or satisfaction for any brand. Instead, clients are asking for strategies. Most of our clients have a well-established history with their customers and often an established line of tracking research that is already in place. This means overhauling the research plan is not usually an option.

So, how do you find a new strategy using the same data? From the analytical standpoint, the initial roadblock is that tracking studies don’t often inspire the critical question until AFTER the results are tallied. So if we stick to simply reporting data collected through direct respondent questioning there will be very little strategic insight.

The solution starts with correcting this article’s first statement: Tracking studies do not have a problem; they are meant to provide context and lots of it.

With such a wide range of market changes that any one tracking study needs to monitor, the scope of possible analysis can be daunting. Given that it is just not realistic to look at all possible combinations of data to find our answers, the real challenge is focusing the analytical scope on what is important.

The concept of narrowing down the scope of a topic to focus on key issues is hardly a new idea. Nearly every researcher on the planet does something similar when it comes to basic survey design. There are always founda-tional questions to help narrow the focus for the respondent, for example:

It’s an important question that is not just common but a necessity for the study to continue; we need to keep the impending attributes in the context of the brand. Yet, while the question is used to narrow the focus for the respondent, it is usually little more than a footnote during the analysis.

So now, in order to add some strategic direction, we have lists of attributes, designed to track perception, that we are forced to burden with the task of creating differentiation. Unfortunately, few brands exist on levels of such overt consumer awareness that the unique positioning of the brand consistently translates to unique perceptual ratings – hence, competitive sets.

It’s not that brands are not offering their own unique strengths; it’s just that looking at the highest brand level does not typically add the level of insight that can influence the tactical strategies that are already in place.

However, by maximizing the use of the information, we can zero-in and add context to the most critical brand interactions. This exercise assumes that your study has some base quality controls in place. For example, that your sample is robust; reflective of the people you are interested in; consistently defined across iterations; and the general methodology is not drastically altered wave to wave.

The data on grocery shopping habits shown in the table is meant to simply illustrate the process and is not real data.

This has a habit of looking something like Figure 1. 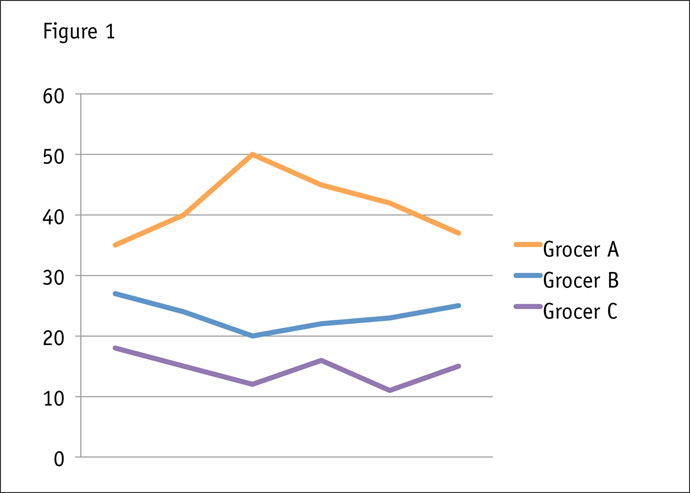 However, leveraging the data from this same question, we have the ability to add the required context to take our understanding of the market to the next level. We have to leverage the fact that our results are measured in the context of an individual, not just the dollars spent. So when looking at the number of people who shopped Grocer A, it is important to see what that means in the context of both Grocers B and C, as shown in Figure 2. 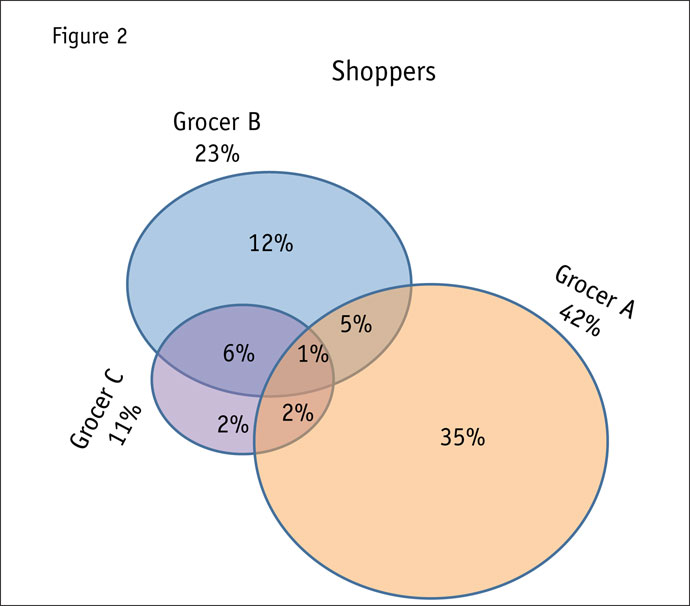 Now we have leveraged the information in a way that is unique to the perspective of the customer’s re-membered history and important to how we understand the overall tactical strategy. Understanding the degree to which people are interacting with the various brands is something that gives us a bit more depth into under-standing our current environment.

If we went no further, we could do some basic profiling to get a feel for who is being reached within the brands and how they differ. It is possible that there could be something here to help us define some new strategies although we still don’t have enough to do anything within the context of the strategies that are already in place.

The next step is to understand more about not just how the brands overlap but how that interaction is chang-ing.

For the sake of argument, let’s compare the last two time periods of our study by looking at Figure 2 and Figure 3. 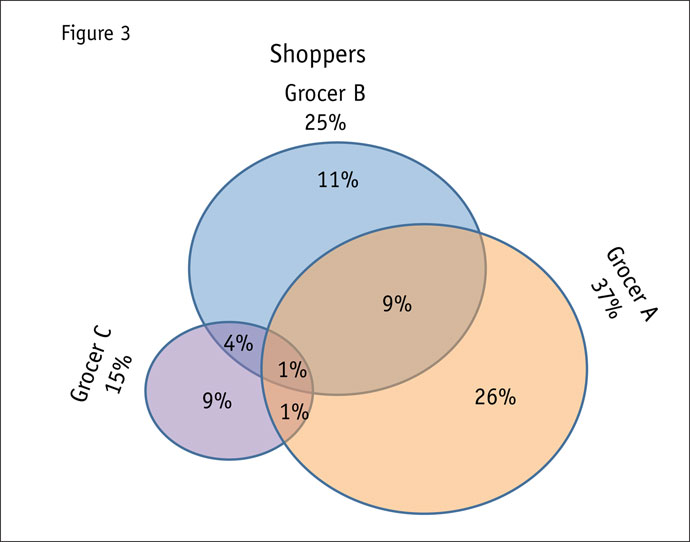 Again we have added a new dimension and see that in addition to profiling the static overlaps there is some-thing to be found in identifying how those profiles may have changed. There has clearly been movement.
Of course, it’s not just the overlaps themselves that are changing but also the size of the circles. So not only do we have movement between the grocer brands but also a more general shift in the number of people shopping any grocer.

This means we also have to expand our look to include brands outside just grocers over the same period.

While some could be tempted to start the process of a five-set Venn diagram, in practice this ends up being a difficult chart to understand (not to mention build). Instead, if we focus on each individual brand to understand the dynamics, there is a greater chance we will be able to articulate what has changed over our given period.

Let’s start with Grocer A as an example (Figure 4). Using a waterfall chart we are able to demonstrate the movements between brands over our two time periods. This offers a bit more context to the total number of consumers shopping our brands. Now we can add: fewer are shopping Grocer A than in the prior wave; more people are shopping both Grocers A and B than in the prior wave; Grocer A is sharing slightly more shoppers with Drugstore A; Grocer A is sharing fewer shoppers with Drugstore B. 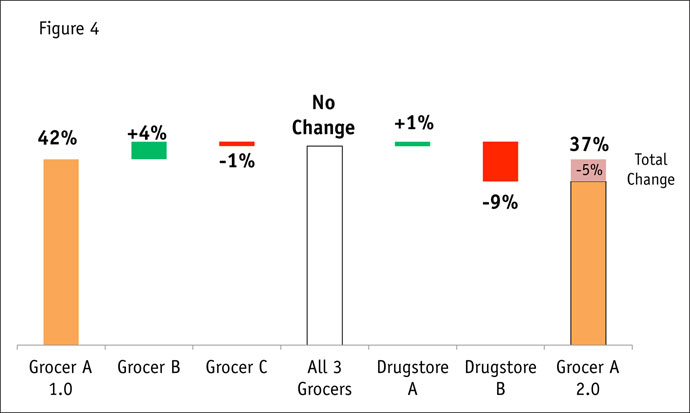 Given that the number of people shopping Grocer A is down, we can say that people are moving away from Grocer A and spending with competitors; specifically, Drugstore B. So while we knew that fewer people were shopping Grocer A, we also know that Grocer A has started sharing more customers with other grocers and has not been competing as strongly for shoppers from Drugstore B.

To be clear, all we are doing is using the data collected in asking people where they have shopped in the past four weeks. We are comparing those responses to the results of the same question from the previous wave. However, instead of showing two static snapshots, the focus is placed on the changes that took place between a single brand and the remaining competitors. 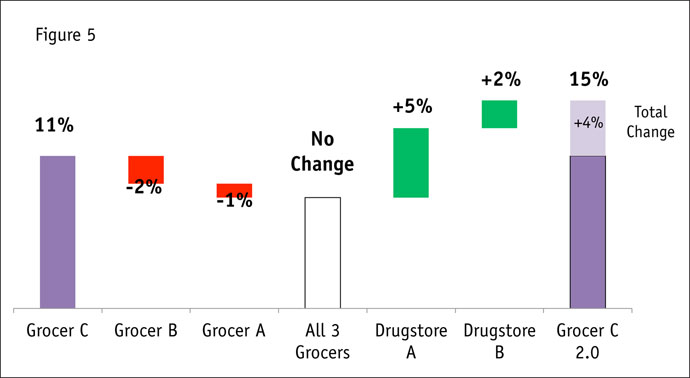 By focusing strictly on the changes between the time periods, we see not only that more people started shopping Grocer C but that they have been competing less with grocers and more with drugstores.

In and of itself, this helps to determine who your dollars are coming from and the extent to which they interact within the total space. We are now able to understand not just when a brand is growing or shrinking but where that fluctuation is coming from or going.

At this stage, we know that Grocer C is pulling shoppers from drugstores while Grocer A is starting to lose out to Drugstore B, even while pulling consumers away from Grocer B.

The next question is why. However, this is a much more direct question than it was when we started.

As opposed to a blank slate, we know the interaction that we are trying to explain and have a vehicle to identify the consumers demonstrating the behavior we would like to replicate.

That said, there is still a lot that could be layered on top of this to make it even more powerful if you have the data to do it. For example, if you have any data about the dollars spent at each brand in the past month, all these numbers can be weighted to reflect shifts in spend.

Identify the areas of opportunity

A successful tracking iteration differentiates the two and allows the brand to evolve, even when its not quite time to evolve the study.